I am fascinated by the deep understanding we can gain from tracking animals. GPS collars for instance generate a wealth of data that allow unprecedented insight into an animal’s life, state, interaction with the environment, and interaction with other collared animals.

I routinely use GPS loggers in my research to intimately observe my study animal’s behaviour. My work is question driven, but my main study systems are lizards and sheep. My research sits at the interface of three exciting research areas, and specifically addresses the complex interconnection between them. You can read more about the interconnection of these areas here, and in a recent paper, where we proposed a novel framework which also included animal personality (Sih et al. 2018).

Animal social networks.  I am interested in how movement and space use affect social network structure and collective behaviour, and how this resulting structure drives transmission processes (parasites, information) and consequently affects fitness and health. I am using social networks to investigate what drives the social structure in populations. For instance, I am interested in how the ecological environment (Leu et al. 2016a) or resource use and resource sharing (Leu et al. 2011a) affects social behaviour and the social population structure. Similarly, I have studied how social avoidance behaviour affects network structure, and how the social environment experienced during the early part of an individual’s life affects social behaviour, and social connectivity later in life (Riley et al. 2018).

Movement ecology. I am interested in how the environment (eg. ecological conditions, and resources) drives space use and movement behaviour (Leu and Bull 2016, Spiegel et al. 2015). Furthermore, I am particularly interested in the interface with social networks, i.e. how movement affects social network structure (Leu et al. 2016a, Spiegel et al. 2016); and the interface with disease ecology, for instance how parasite load affects movement behaviour (Taggart et al. 2018) and how space use (number of refuges used) affects parasite transmission (Leu et al. 2010). 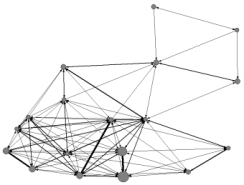 Disease ecology. Here, I am interested in how individual  behaviour upscales to population processes, and how overall network structure affects disease dynamics. Recently, a colleague and I wrote a mini-review about how network models have enabled significant advances in understanding the influence of behaviour on parasite and pathogen transmission (Leu and Godfrey 2018). Network models are an important tool because they link variation in individual behaviour to epidemiological consequences at the population level. I am interested in both, how individual behaviour and network connectivity predicts a host’s infection status (Leu et al. 2010, (Wohlfiel et al, 2013); and how the overall network structure, for instance modularity, affects disease dynamics (Sah et al. 2017).

I have also worked on other related topics that revolve around animal interactions, such as olfactory signalling (Leu et al. 2016b), mating systems and long-term pair bonds (Leu et al. 2015).